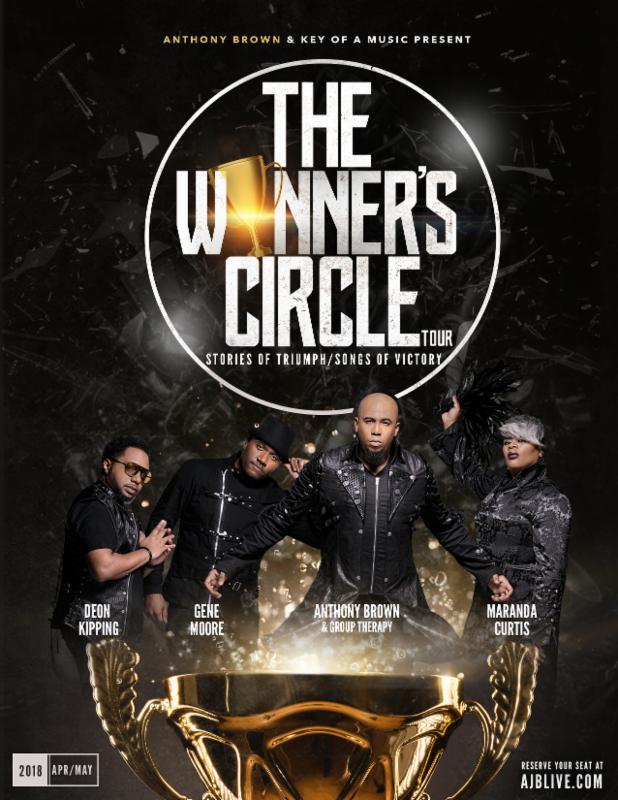 ANTHONY BROWN & group therAPy PRESENTS
THE WINNER’S CIRCLE TOUR
FEATURING MARANDA CURTIS, DEON KIPPING AND GENE MOORE
Multiple award-winner, Grammy nominee Anthony Brown & group therAPy announce THE WINNER’S CIRCLE TOUR to launch this April. This special limited-run will kick off on Friday, April 5 in Bridgeport, CT. THE WINNER’S CIRCLE TOUR, will have additional dates across the country including Houston, Dallas, Atlanta, Winston-Salem, NC, Richmond VA, Bolingbrook (Chicago), and Indianapolis.
Anthony Brown launches a fresh new take on gospel touring. THE WINNER’S CIRCLE TOUR is what happens when extraordinary music and production collides with the compelling stories of triumph. Brown and group therAPy will take to stages across the US this spring to celebrate and encourage the champion in you. He has enlisted the tales and tunes of other winners including Maranda Curtis, Deon Kipping, and Gene Moore. The combined efforts of this line up will make every performance a night to remember! Grab your tickets. Bring your story…and meet them in THE WINNER’S CIRCLE TOUR.
Since his debut onto the music scene, Anthony Brown & group therAPy, have been impacting the gospel music scene with the right balance of modern church and core Christian messages. His current album, “A Long Way From Sunday” has been heralded as one the best Gospel albums of 2017 and has generated two hit singles “Trust In You,” and “I Got That.” For the second year in a row, Anthony Brown received 10 Stellar Awards nominations, the most by any other artist.
Tickets, VIP Packages and more will be available on AJBLive.com today. You can find details for cities, dates and venues online.
JOIN THEM FOR AN EVENING OF SONGS & STORIES OF VICTORY!
Tour Information Here
**Information Provided By Ignition PR**